We share this report for the interest of our readers. It is from the independent Chilean News outlet NewsClick

With the recent hike, the users of the Chilean public transportation services pay some of the highest fares in the region
Peoples Dispatch 17 Oct 2019 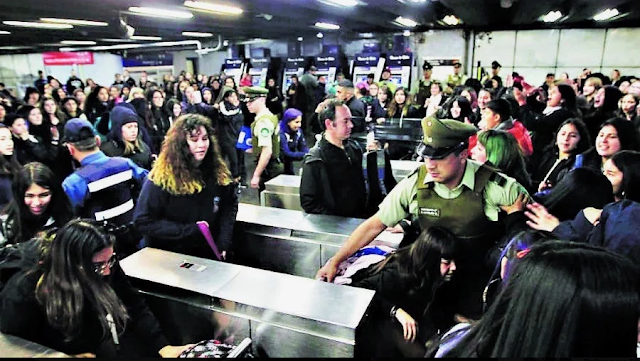 For the past several days, high school students in Chile’s capital Santiago, have been evading the payment of metro tickets and are traveling for free to protest the recent hike in Santiago Metro fare, recently announced by the right-wing government of President Sebastián Piñera.

On October 6, the Ministry of Transport and Telecommunication, announced through a resolution, an increase in the fare of Metropolitan Public Transport Network, which affects citizens traveling by buses, Metro and Central Train in 32 communes in the province of Santiago. According to the new traffic structure, during peak hours, the metro ticket will cost 830 Chilean pesos (1.16 USD) and the bus ticket costs 710 Chilean pesos (1 USD), making Chilean public transportation services one of the most expensive transportation services in Latin America.

The protest action began last Friday October 11, when over 80 students from the National Institute stormed the University of Chile, Bellas Artes and Santa Lucía metro stations, jumped the turnstiles and entered platforms without paying for tickets.

The hashtag #EvasiónMasiva (#MassEvasion) trended on social media to call on people to permanently evade the payment of metro tickets as a way of expressing discontent with the hike.

A great majority of working class in Santiago rejected the government’s decision and supported young chileans. They also condemned the alleged solution of the Minister of Economy, Juan Andrés Fontaine, who proposed that users get up early so they can access a slightly less expensive ticket
Posted by Richard Mellor at 7:45 AM