Just a very quick report on the UAW/GM tentative agreement. The UAW wants to get this contract accepted and get back to normal, for them that is.  The UAW leadership's national Council sent the tentative agreement out to all UAW union halls and are hoping to get the contract voted on (and accepted no doubt) by next Friday.

As you can see in this short clip from Detroit's TV 4 what I know so far is that in order to get the members to sign GM is offering:

Look how much money up front they are offering for you to sell your future.

The situation at Lordstown appears to be remaining the same and it appears, as is often the case, workers are being offered transfers to other parts of the country. This is what the GM bosses call job security, uprooting ones family and moving hundreds and sometimes thousands of miles away.

The UAW spokesperson in the video Brian Rothenburg talks  of the strike being more than just for the UAW, but for "..the hearts and minds of American workers and the middle class."

Trade union bureaucrats like Rothenburg dare not mention the term working class for fear of hinting that this is all we are.

As I say, this is very brief. But what I urge fellow workers, especially the young workers whose futures are being denied them by capitalism (what the brother in the video refers to as greed) and its rapacious quest for profits to read the piece I sent out a week or so ago because in it I share the honest and committed views of the people who control our lives; who own GM, the  economy and how society is governed.

Here is what I wrote:
The Wall Street Journal of September 27th had this to say: “For the UAW, there’s no avoiding the harsh reality of a wider transition taking hold across the auto industry: Building electric vehicles requires far fewer workers, making it near-impossible to avoid job losses and wage cuts. In addition, fewer components are needed, and many of them are imported.”( My added emphasis)

This mouthpiece of US big business wrote that GM is “redirecting capital” to produce 20 new electric models in the next few years “mostly in China”  Ford is spending $11 billion on this venture as are the foreign auto companies.

Gary Jones, the UAW president agrees with the auto bosses and billionaire investors that “We want new investment in technology and products to help keep us on the cutting edge, and training to make sure our workers are competitive,”

This philosophy is a disaster and we cannot win if we adopt it. A house that is erected or a dam that is built on the basis of incorrect flawed blueprints and design will collapse. It is the same with theory, strategy and tactics that we as workers adopt in our struggle with bosses to maintain a decent living and improve our material conditions. We have to rely on our own strength, demand what we and all workers need and design the blueprint for winning it.

It is less that the heads of the UAW and some leaders in the trade union movement are in bed with the bosses or taking bribes from them or involved in any other crooked behavior, than they have the view of the world that Jones expresses in the above quote. We cannot build solidarity and a movement either at home or internationally with that view. And we cannot win if we don't build international solidarity. We cannot build it locked in this partnership of death, these jointness programs with the bosses.

We are in a struggle on two fronts. One is against the bosses and the investors on Wall Street that actually own our workplaces, and the other is the struggle against these concessionary policies of our own leaders. We have to transform our unions and that means ridding ourselves of the present leadership. We have to become active and see ourselves as leaders, as policy makers as activists. We have to become conscious of ourselves as a distinct class of people with our own interests and our own goals and desires. We have to see all other workers as our allies in this. We have to oppose racism, sexism and all forms of the bosses' divide and rule tactic that weakens our unity and our ability to improve our lot.

I wrote previously:
Not only should the UAW strike Ford and Chrysler/Fiat, but serious efforts to build links throughout the labor movement and wider society should be paramount.  Not only should the UAW leadership reach out to the teachers/educators movement, but just down the road from the UAW headquarters working class people in Flint Michigan have been forced to drink poisoned water. There is a crisis in numerous urban centers over poisoned water; organized labor must not be silent on these issues.The movement for climate change which is so important to our youth should be approached as well. Auto workers have a lot of potential allies but the present leadership will not reach out to these forces in a serious way other than rhetoric about the middle class and so forth.

The rank and file of the UAW have the power  to change this situation and a rank and file conference against concessions could be called of all UAW workers at Ford and Chrysler/Fiat  The basic demand to make all temps whole, union members and given back pay for years of wages stolen from them could not be won with this leadership and workers should consider that we are entering in to a recession or slump so market forces will take care of that $12,000 cap. As I said in a previous piece, capitalism has no obligation to treat us fairly. It is inherently an unfair system and we should see the world as it really is.

As workers and as union members, we set our sights too low along with our expectations. We never got what we have without a struggle and we won't keep it or improve on it without one either.

The first step brother sand sisters in the UAW is to vote this contract down. 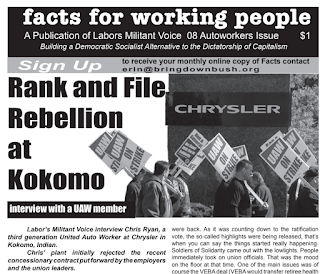