Ukraine: a grim winter ahead

As the war along Ukraine’s borders takes a new turn, with Russian incursions on the south-east coast and NATO preparing a new ‘expeditionary force’, Ukraine’s economy heads fast down a black hole. New President Poroshenko, one of Ukraine’s feuding oligarchs (in his case, the confectionery king), has dissolved parliament and called elections for 26 October. The election will probably lead to the removal of all the old supporters of the ousted pro-Russian former president still in parliament. They have been blocking attempts by the current caretaker prime minister Arseniy Yatsenyuk to carry out the dictates of the IMF under the $17bn ‘reform’ programme agreed last April.

In return for IMF money to meet foreign debts and fund the state (for arms mostly), the Kiev government agreed to huge cuts in public spending, pensions and welfare and, above all, to privatise state agencies and raise energy charges for heating and fuel by over 40%, a total reduction of government spending of 6.75% of GDP. The government agreed to these draconian measures because there was no alternative. As Yatsenyuk said, while the IMF deal would mean hardship for the people and be unpopular, he was prepared to conduct ‘suicide politics’.

Yatsenyuk was so frustrated by parliament’s lethargy in agreeing the IMF measures that he threatened to resign, forcing a collapse of the government. The measures were finally passed, but not before the economy minister Pavlo Sheremeta also threatened to resign in anger at delays in implementing the IMF ‘reforms’. “We need to change this whole paradigm: the system, the people, the processes,” Sheremeta said.

The problem for the pro-IMF government and its foreign investor supporters is that the economy is on its knees and the targets set by the IMF will not be met. In addition, the war is destroying the country’s infrastructure. For example, an $80m food processing plant, opened in 2000 by Cargill, was one of the first big greenfield investments into independent Ukraine. It was abandoned by the US agriculture group’s employees after being stormed by pro-Russian gunmen. Now it has been destroyed by fire.

The latest data indicate that the Ukrainian economy has contracted almost 5% yoy so far this year, the IMF’s forecast for the whole year. The final contraction for 2014 is likely to be 8% in real terms, even if the war should subside. 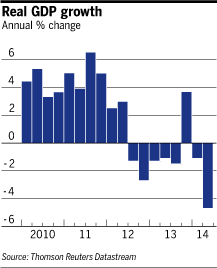 The loss of Crimea alone has cut Ukraine’s GDP by 3.7%. The rebel provinces of Donetsk and Lugansk account for about 16% of GDP and 25% of exports.

An energy crisis looms for the winter. Russia’s Gazprom, which provides more than half the country’s gas, stopped supplies in June. The government has been paying fuel subsidies equivalent to 7.5% of GDP. Its energy intensity – the ratio of energy used to economic output – is twice that of Russia and ten times the OECD average. Reducing this huge waste of energy is part of the IMF plan. Carl Bildt, Sweden’s foreign minister, reckons: “If Ukraine improved its energy efficiency to reasonably EU levels, I doubt it would need to import any energy at all.” The resources to do this through better management of heating, insulation and control of private energy companies are not there, of course.

The IMF wants to cut public spending so that government debts do not rise so much that foreign lenders, including the IMF itself, won’t get their money back. You can see how much Ukraine will owe to the IMF by 2018 in the graph below.  Public sector debt-to-GDP will double towards 87% by 2018, as taxation of the rich oligarchs is non-existent. Ukraine owes $3bn to Russia itself and Moscow can demand immediate repayment. 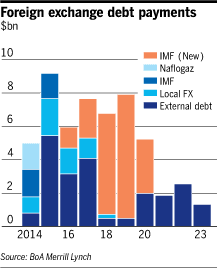 As I argued in my last post on Ukraine (http://thenextrecession.wordpress.com/2014/08/11/ukraine-a-rock-and-a-hard-place/), the falling value of the hryvnia only makes the debt on foreign currency terms worse. The IMF’s own risk assessment warns that if the hryvnia falls to 12.5/$, then the stresses on bank balance sheets would require a bailout of at least 5% of GDP. The currency is currently weaker than that, at 13/$. 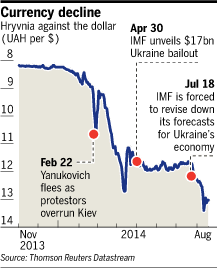 The IMF issued a statement before the weekend congratulating the Kiev government on trying to meet its demands: “Overall, economic policies have generally been implemented as agreed in the program, as the Ukrainian authorities have persisted in taking difficult measures despite the volatile political situation.” But despite the imposition of severe austerity measures, the IMF is worried that it will still go pear-shaped: “However, the conflict in the eastern part of the country is taking its toll on the economy and society, and compensatory measures will be critical to achieve key program targets agreed for 2014 and beyond. The program remains highly challenging and continues to hinge crucially on the assumption that the conflict will subside in the coming months.”

As Christine Lagarde, the IMF’s managing director, said: “Downside risks to the program remain very high. The program success hinges on a timely resolution of the conflict in the East, as well as on the authorities’ strong policy performance and adherence to the planned reform.”

What is the IMF answer to the worsening economic situation? More austerity. Lagarde (now under investigation for corruption herself) called on the government to “(i) take steps to accumulate international reserves, (ii) tighten the fiscal stance in 2015–16 relative to the initial program targets, and (iii) step up efforts to put Naftogaz on a sound financial footing by improving bill collections and adjusting energy prices as needed.”

It is almost certain that the IMF will have to cough up more money to tide Ukraine over or Ukraine will default on its debts and obligations to foreign governments and investors. A “reprofiling” policy is being discussed by the IMF board. This would ‘stretch out’ any repayments but leave the overall debt untouched – still a default and restructuring but a ‘soft one’.

There is an alternative to the Kiev government policy of capitulating to the IMF. A socialist government would take over the interests of the oligarchs who stole Ukraine’s wealth in the first place. It would seize those funds to meet the needs of ordinary people on heating, education and public services. It would revoke the debts owed to Russian and Western banks and demand that the IMF write off its loans so that Ukraine could start without the heavy burden of debt. Ukraine remains a key agricultural exporter and also a low-cost steel producer. If the banks and major export sectors were in the government’s hands and not those of oligarchs (and foreign private equity companies in the future), then a national plan could be implemented.

Also, it would offer to discuss with genuine representatives of the Russian-speaking eastern areas a proper federation and autonomy, a guarantee of rights in education and language. The aim would be to reassure the Russian-speaking areas with economic and political support, rather than the alternative of war that Poroshenko and Putin promote. Instead, Ukraine’s people, both in the west and east, face a grim and increasingly deadly winter.
Posted by Richard Mellor at 8:43 AM