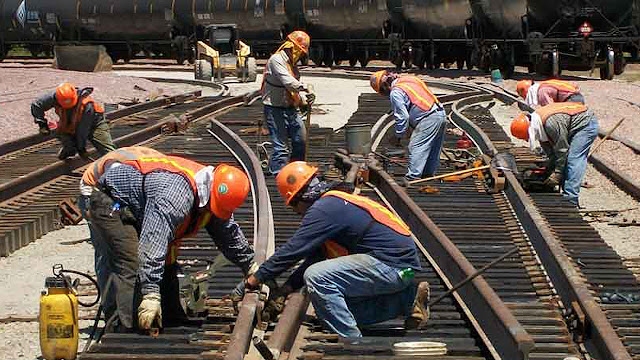 I just heard today that one of the two remaining rail unions voting on a tentative agreement with the rail bosses that was developed with the help of the Biden Administration in September, have voted the agreement down by a 51% margin.

Members of the Smart Transportation Division that represents conductors, and the Brotherhood of Locomotive Engineers and Trainmen were the last two major unions to vote. The Brotherhood ratified the agreement with 53% in favor. Seven unions have ratified the contract and three smaller unions have also rejected it and are in negotiations. But for the agreement to pass, all 12 of the railroad unions have to accept it and workers will honor picket lines.

Naturally, most reports on the contract mention that there is a $24% raise in the package, a figure the MSM is promoting, but that is over 5 years. But workers have lost so much ground this is no big deal and more importantly, inflation is at “7.7% for the 12 months ended October 2022 after rising 8.2% previously” U.S. Labor Dept. data published 11-10-22 so let’s not fall for that trick.

As it has been reported over the past few months, the major issue for rail workers are working conditions and the effect this has on their personal lives and families. Time off is a major problem as well as long periods on the road that make it very difficult to take time off for medical issues like doctor’s visits or for a child’s birthday or graduation. The solution to that problem the spokespersons for the investors and other wasters that own the this industry is that, “…employees can generally attend to these needs by taking paid vacation” NY Times 11-21-22 after all, they generously agreed to give the workers up to three days a year for a “routine medical appointment” and won’t be disciplined.

I have not been following these negotiations in depth but it’s important for us to grasp that a contract rejected by a slim majority does not mean the workers like it. A cursory glimpse in the past shows us that when rank and file members reject contracts the leadership recommend, the leadership then engages in a war aimed at wearing down the resistance and getting a deal that is acceptable to the employers and the Democratic Party. This is what happened in September when members opposed the contract. So to reject a contract at all with the management friendly leadership at the helm of the unions is a brave move.

This comment from Biden’s Labor Secretary, Marty Walsh, who was the president of the Laborers Union and also secretary treasurer of the Boston Metropolitan Building Trades Council before becoming Boston’s mayor, is a shot across the bow, a warning to the railroad workers that the Labor Secretary does not have their back. He said in an interview with CNN on November 5th 2022, when there was a possibility of a strike, that if, “…for some reason [one of the unions] doesn’t get to an agreement with the companies then … Congress will have to take action to avert a strike in our country,” CNN Business.

Comments like this from a major labor official do not inspire confidence among the membership and they are not intended to, it reflects the deathly marriage between the Democratic Party and the leadership of organized labor. Walsh might try to claim his comments are simply describing what might happen as some members of Congress have been talking about imposing a contract if the workers strike; but we know it’s a threat. This is a group of workers who get no sick leave, something members of Congress have and more.

We get some idea of the tremendous economic power of the organized labor movement in the U.S, despite membership being at a historic low compared to the post war era. The WSJ points out that the U.S. economy would lose $2 billion a day if the railroad workers struck. About 28% of U.S. freight is carried by rail and about 40% by trucking. There is real worker power in that statistic. Truckers have been restless over the past period with long hours, low pay and brutal conditions. Another opportunity knocks here for organized labor along with the unorganized and all those victims of market savagery if all those struggles were linked organizationally. The railroad workers complain of inhuman treatment, of cuts and excessive workloads, this is the same across the board.

Martin Oberman, Chairman of the Surface Transportation Board, the federal agency that regulates the industry points out that:
“During my time on the Board, I have raised concerns about the primacy Class I railroads have placed on lowering their operating ratios and satisfying their shareholders even at the cost of their customers.  Part of that strategy has involved cutting their work force to the bare bones in order to reduce costs.  Over the last 6 years, the Class Is collectively have reduced their work force by 29% – that is about 45,000 employees cut from the payrolls.”(my added emphasis)

This is occurring throughout all industries and has been going on for decades.

Workers are reaching a tipping point and not just in the US, but throughout the world.

Recognizing this potential power that organized labor has, let’s not lose sight of the fact that the International Longshore Workers Union (ILWU) has been in contract negotiations for 4 months. Biden has also involved himself in these negotiations on behalf of the employers. From what I can gather, the ILWU leadership, the Biden Administration and the Port bosses have agreed that there will be no strike and no disruption to the economy.

The ILWU has the ability to shut down commerce on the entire West Coast of the U.S. What is more despairing is that there has been a complete media blackout of the talks between the ILWU leadership and the port bosses and their organizations. It also appears there is no major objection from within the ranks of the ILWU, nothing that is expressed publicly anyway. This is a bit surprising.

I raise these points because we often hear about how weak organized labor is or that organized labor is finished. But it’s clear that with a leadership that was prepared to fight and had a strategy and tactics that could win one, labor could change the balance of class forces in the U.S. and usher in a new era.

We clearly are not weak. But we are in a battle on two fronts, one against big capitalists and the speculators on Wall Street, and the other against the policies and class collaboration of the labor hierarchy. The latter is the harder of the two. As anyone familiar with my writings on this subject, I do not believe the root cause of the labor hierarchy’s betrayals is simply corruption in the criminal sense; these are secondary factors and often are a result rather than the cause. And I do not believe we simply ignore the present leadership in the hope they’ll magically go away. They are ideologically bankrupt, but they will not stand idly by when challenged.

They see no alternative to capitalism so to mobilize the power that these couple of statistics I have raised here reflect, can only lead to chaos from their point of view. So when the class struggle becomes more acute and the possibility of capitalism entering crisis rises, they move to rescue it, to bail it out. They are, as De Leon once said, the “Labor Lieutenants of Capital” in the workers’ organizations.

Who knows what will happen in this case. I would like to think that we will see that movement from below that will begin to dislodge the present pro-market clique atop organized labor and times are volatile enough that it wouldn’t shock me the anger is great in U.S society. None of us expected the teachers/educators battles in 2018-19, and the unorganized might produce some added pressure.

Either way, this is just one battle in the ongoing war.

Posted by Richard Mellor at 3:46 PM

Debt allows capitalalism to go beyond its limits