California, ‘America’s garden,’ is drying out

This is a warning that we ignore at our peril and there will be a tipping point. First published at Yale Climate Connections, shared from the eco-socialist Facebook Page Climate and Capitalism.

Persistent ‘severe’ drought is having widespread negative impacts on California and other western states.
by Dana Nuccitelli 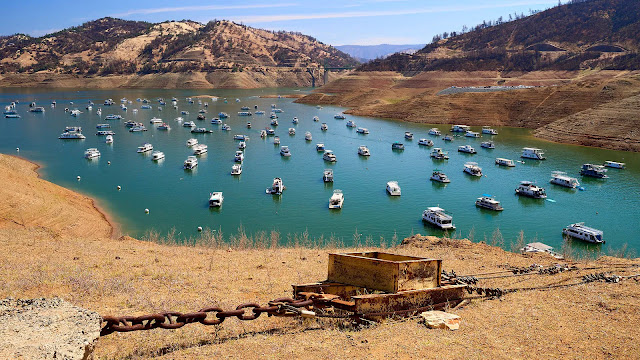 California, along with much of the rest of the western United States, is once again mired in drought. In fact, California has experienced significant drought conditions in 13 of the 22 years (60%) since the turn of the century.

A 2020 study in the journal Science concluded that 2000 through 2018 was the second-driest 19-year period in the U.S. Southwest in at least the past 1,200 years, and a 2014 paper in Geophysical Research Letters found that 2012 through 2014 was the driest three-year period in California over that same timeframe.

Nearly the entire state is currently in the ‘severe’ drought category or worse, and three-quarters is experiencing ‘extreme’ to ‘exceptional’ drought, according to the U.S. Drought Monitor.

The consequences of drought in California are felt well outside the state’s borders. California is effectively America’s garden – it produces two-thirds of all fruits and nuts grown in the U.S. The state’s agricultural industry generates $50 billion each year, which is more than the entire gross domestic products of Vermont and Wyoming, and as large as the economy of Alaska or Montana.

California produces nearly all of the almonds, artichokes, avocados, broccoli, carrots, celery, kiwi, figs, garlic, grapes, raisins, raspberries, strawberries, honeydew melons, nectarines, olives, pistachios, plums, tangerines, mandarins, and walnuts grown in the U.S. About 80% of all almonds in the world are grown in California: The state’s almonds alone generate $6 billion annually. But nut trees are water-intensive (though notably less so than the alfalfa and pastureland grown for animal agriculture), and unlike seasonal crops, they cannot be fallowed in a dry year. Given the lack of water in 2021, some farmers have been forced to resort to tearing out valuable almond trees and instead planting less thirsty crops.

About 80% of the state’s developed water use goes to the agriculture industry, so anyone who enjoys eating fruits and nuts should be concerned that climate change is increasing the odds of megadroughts permanently drying California.

According to the 2020 study in Science cited earlier, human-caused climate change made southwestern drought conditions between 2000 and 2018 about 46% more intense than they would have been naturally, “pushing an otherwise moderate drought onto a trajectory comparable to the worst [U.S. southwest] megadroughts since 800 CE,” the heyday of the Mayan civilization.

It’s not just California; 96% of the western U.S. is currently experiencing drought conditions, including the entire states of Oregon, Nevada, Arizona, Utah, and New Mexico. The drought conditions led Utah Governor Spencer Cox recently to urge the state’s residents of all faiths to hold a “weekend of prayer” for rain.

There are several different kinds of drought, all worsened by human activity. Dwindling soil moisture is known as “agricultural drought,” and is exacerbated by the increased evaporation and transfer of moisture from land to the atmosphere that comes about in a warming climate.

A lack of rain and snow is called “meteorological drought.” A 2018 study in Nature Climate Change used climate models to predict that California’s precipitation patterns will shift in a hotter world, with more rain falling in the winter but less in spring and fall months, lengthening the state’s dry season. This prediction was borne out in a 2021 study published in Geophysical Research Letters, with researchers finding that “the precipitation season has become shorter and sharper in California” since the 1960s.

“Snow drought” also plays a key role in California, 30% of whose water supply originates from the snowpack in the Sierra Nevada mountains. As temperatures rise, more precipitation falls as rain and less as snow, and the snowpack melts more quickly in the late spring and early summer. A 2018 study in Geophysical Research Letters estimated that global warming has already shrunk the Sierra Nevada snowpack by about 20% and increased early-season runoff by 30%, and that each additional degree Celsius of warming will shrink the snowpack by about another 20%.

Snow drought in California can then lead to “hydrological drought,” when water levels fall in rivers, lakes, and streams. In June 2021, California’s reservoir water levels were about 40% below the historical average, and the snowpack was completely gone more than a month earlier than normal.

In addition to its adverse impact on California agriculture, drought results in damaged forests, worse wildfires, reduced hydroelectricity generation, stressed fish populations, and depleted groundwater aquifers. According to the Fourth National Climate Assessment Report, the combination of worsening droughts and expanding bark beetle populations due to warming winters killed 7% of the western U.S. forest area over the past four decades.

The hotter and drier conditions during most of the year, combined with the dead trees, have created more fuel for wildfires, which the report concluded have burned twice as much area in the southwestern states over the past three decades as would have burned in the absence of human-caused climate change. The smoke from those wildfires is dangerously unhealthy to breathe, and in the record-shattering 2020 fire season, the wildfire smoke spread all the way to the U.S. east coast.

That same report found also that the severe drought between 2011 and 2015 reduced hydroelectricity generation in California by two-thirds. The water level in Lake Mead, the reservoir formed by Hoover Dam near Las Vegas, has fallen by 130 feet to its lowest level since its creation in 1936, and the reservoir has lost 60% of its water volume since 2000. As the National Assessment Report concluded, “The reduction of Lake Mead increases the risk of water shortages across much of the Southwest and reduces energy generation at the Hoover Dam hydroelectric plant.”

The lack of surface water also threatens salmon and other fish species in California rivers. And it forces farmers to pump more water from groundwater aquifers, which leads to land subsidence that also stresses infrastructure.

As water resources experts at the Pacific Institute wrote earlier this month, there are steps that southwestern states can take to mitigate drought impacts, “including changes in the efficiency of urban and agricultural water uses, the expansion of non-traditional water sources like stormwater and recycled water, and voluntary changes in behavior.” Curbing greenhouse gas emissions from fossil fuels is of course the most important measure to lessen the threat of megadroughts in the future and their impacts on one of America’s key food-producing states.

Dana is an environmental scientist, writer, and author of 'Climatology versus Pseudoscience,' published in 2015. He has published 10 peer-reviewed studies related to climate change and has been writing... More by Dana Nuccitelli

Posted by Richard Mellor at 7:02 AM

Archeologists have discovered a mystery at the bottom of Lake Huron