An Appeal from Mercedes Martinez in Puerto Rico 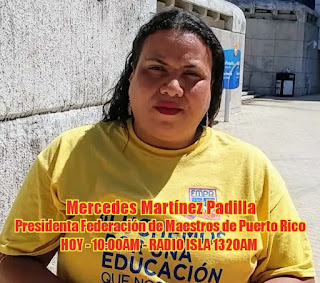 I am in a bit of a hurry and will soon be unable to have a signal. I got this appeal from Mercedes Martinez in Puerto Rico and read it quickly. I encourage all allies in the trade union movement and all workers to read it and respond. Mercedes can be reached at: mercedesmartinez452@gmail.com if you want to know more details. I am going to be out of action for a few hours. Richard Mellor

To all my Facebook peeps in the US, I need your help to please send this message to your local IBEW chapter. Imagine that the government decides to unilaterally change existing laws in order to nullify your collective bargaining agreement and disband your local electrical utility union by assigning you and your fellow electrical utility workers to instead work on other government agencies as security officers, heavy vehicle drivers, messengers and other non-electrical related fields.

Imagine that whilst you are being displaced, demoted and degraded, and while the issue is being handled in Court, the incoming electric utility concessionaire instead of simply willing to even recognize the local electrical workers union, decides to call upon another electric workers’ union to work as #scabs.

This may sound like fiction. But it is happening right now to Puerto Rico's local electric utility union, #UTIER. Where in the process of privatizing the public utility, the government literally changed the laws in order to annul our Collective Bargaining agreement, and allow the newly created private company LUMA, composed of Quanta and ATCO, to not recognize our local union and instead try to pick out and hire workers individually for less than our current benefits and start from scratch for we lose our retirement plan.

Imagine that after 20 years of electric utility service, your local government rigs the privatizing negotiations to have your retirement plan collapse, meaning that you'd have to start over when no longer in your prime, and are forced between being transferred and demoted or joining a company that doesn't want to recognize your union, nor your collective bargaining contract, nor your seniority, nor your benefits, nor your retirement and calls in another union to bring in the scabs.

I never imagined the IBEW would ever do the shameful work of playing scab-trader and be part of the scheme to dismantle a fellow electrical utility union. I know honorable, hard working IBEW union workers would reject playing the role of a scab.

So I must assume you are being misled by your leadership, who are shamefully misleading its members into working as scabs and being treated as scabs, in an environment that will be unsafe for them, as the conditions are brewing for an all out statewide strike and working class war.

I call for your union members' solidarity and to reject being scabs. (See the links, some are in Spanish so have your browser ready to translate the Spanish links, and/or visit and browse through pictures, videos and articles in the page La Verdad sobre LUMA Energy, i.e. the Truth behind LUMA Energy, link provided below) (The Truth Behind LUMA Energy)

Posted by Richard Mellor at 2:09 PM