UAW Members Campaign For One Member One Vote of National Leadership

UAW members will be voting on a referendum in a few months that if passed will give one member one vote in electing the individual members of the UAW's Executive Board.  This would replace the present delegate system which has re-elected the same, concessionary and class collaborationist leadership time and time again. This article is reprinted from the Unite All Workers for Democracy Website. It comments on an interview with recent retired UAW President Rory Gamble where he shares his opposition to one member one vote.

Here are a few of my thoughts on the issue. The article is good piece. Bureaucrats like Gamble would oppose this change as they are afraid of the membership as the real issue is the membership of the UAW or any union, is generally far to the left of our own leaders. Any rank and file control or independent activity from below threatens the relationship the officialdom has built with the bosses based on labor peace and the worship of the market. I recall when the SEIU members here in San Francisco voted a concessionary contract down twice, officials claimed publicly that they were "confused". What arrogance and a complete disrespect they have for the folks who pay the dues. The IAM national leadership intervened in the dispute at Boeing some years ago in order to pass a management friendly contract that rank and file IAM members voted down.

The article makes the point also that one person one vote isn't a guarantee against sell outs or what are often misnamed corrupt activities (not that real corruption doesn't exist, we live in a corrupt society why would it not?) and gives many examples of legal activity that is harmful to workers and members' interests as well as outright pro-management deals.

I say misnamed with regard to the term corrupt because it is the bankruptcy or corrupt ideology that is the problem. The leadership worships the market, gives bosses certain rights like owning the factory, controlling production and that profits are sacrosanct. They have the same world view as the boss does. Any leadership that does not abandon this view and the Team Concept that is at the root of it will fall prey to the same trap. Richard Mellor 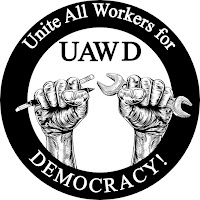 Brother Gamble’s Criticisms of One Member One Vote Ring Hollow 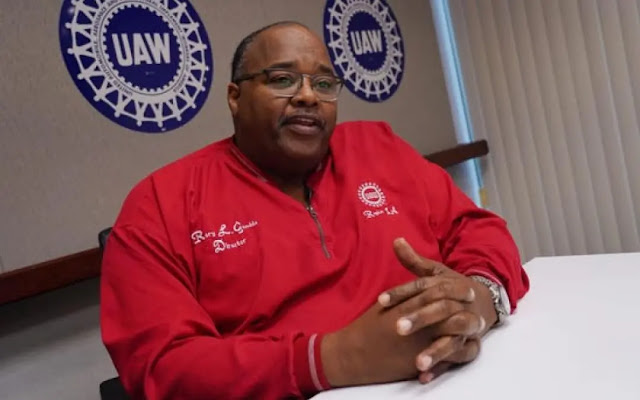 Former UAW President Rory Gamble officially retired on June 30th, but not before giving an interview where he discussed the future of the union, and — perhaps, most importantly — the upcoming referendum where the rank-and-file will decide whether or not they should have the right to directly elect members of the International Executive Board (IEB).

During the interview, Gamble was asked whether or not he believed IEB positions should be directly voted on by the UAW membership. While it wasn’t surprising to learn that Gamble, a member of the Administration Caucus, is adamantly against each member of our union having a direct vote of IEB officers, some of his criticisms of direct elections (One Member One Vote) were odd to say the least.

Gamble gave the following response when asked why he was opposed to direct elections of International Executive Board officers:

“A lot of them (UAW members) don’t understand all the ramifications. In contemporary times, our problem is anti-union-funded enterprises that spend a lot of money, put out a lot of disinformation to destroy unions. The delegate system allows us to make sure every local in our union has a voice. We have many sectors. One of our largest is auto, with active and retired members. Basically, that large majority vote could take up every spot. And smaller sectors like higher education, gaming, independent parts suppliers, health care — they could get swallowed up and not have representation on the board. It ensures we have women, we have minorities. You could see, probably, an all-male leadership team that doesn’t reflect the membership. One member, one vote has absolutely nothing to do with corruption and will not prevent corruption. Corruption begins in the heart. Strong financial controls and strong accurate oversight prevents corruption.”

Let’s take a closer look at some of the claims made by Brother Gamble in the aforementioned interviews:

1. “The delegate system allows us to make sure every local in our union has a voice.”

How can Brother Gamble make this claim when over 225 Locals were not at the last UAW Convention in 2018? The vast majority of those Locals did not attend because they lacked the funds to do so. These Locals had absolutely no voice in electing our current International Executive Board.

I addressed this commonly cited criticism of One Member One Vote in an article I wrote back in April.

When I spoke with Ken Paff, National Organizer for Teamsters for a Democratic Union (TDU), back in June of 2020 about whether or not One Member One Vote would disenfranchise smaller Locals, he gave a specific example of how direct elections actually give smaller Locals more of a voice than under the delegate system.

“Direct elections do not disadvantage small locals in the Teamsters. In fact, there have been many cases where small locals have had a huge impact.

For example, during the 2016 Temster elections, Local 19 in Texas had 75 votes for James Hoffa Jr and 602 votes for Fred Zuckerman, so Zuckerman emerged from that local with a 527 vote lead over Hoffa. In Local 988 in Houston, Hoffa got 542 votes and Zuckerman got 302, so Zuckerman lost by 240 votes.

Local 988 is more than twice as big as Local 19, but Local 19 had more impact on the election due to the turnout and the margin of how many more votes one person got over another.

And who gets votes essentially comes down to who is the most organized in worksites and locals across the country.”

Compare that to our current system, where a Local, such as Local 600, had 34 times the voting power than the 166 Locals in attendance at the 2018 Constitutional Convention who were represented by a single delegate.

2. “(Under direct elections) smaller sectors like higher education, gaming, independent parts suppliers, health care — they could get swallowed up and not have representation on the board.”

Let’s take a look at the sectors in which the officers of our current International Executive Board came from.

Only Beverly Brakeman came from another industry outside of manufacturing. So, there are a lot of sectors within our union that are not being represented on our current delegate elected International Executive Board. I would be interested to find out from academic workers in our union if they feel they are currently being represented fairly on the IEB, given that they make up around 20% of the current UAW membership.

3. “It (the delegate system) ensures we have women, we have minorities. You could see, probably, an all-male leadership team that doesn’t reflect the membership (under One Member One Vote).”

I am genuinely interested to know how Brother Gamble came to the conclusion that under One Member One Vote there would be a lack of women, or minorities, or that there would probably be an all-male leadership team. The membership of the union is much more diverse than the IEB leadership.

Although the Administration Caucus has been in control of the UAW for decades — overwhelmingly elected time and time again under the delegate system — they chose not to nominate an African American to the highest office of the union until 2019 when they selected Brother Gamble.

In addition, the current delegate-elected Executive Board recently passed over Cindy Estrada — a minority woman — to fill either the President or Secretary Treasurer positions when Gamble and Vice President Gerald Keriam retired. According to a report by the Detroit News from April, Estrada was vying for the Secretary Treasurer position. Yet, the delegate-elected E-Board chose to appoint Frank Stuglin — a white male — to the position instead. They also appointed Chuck Browning, another white male, to replace the outgoing Keriam.

This is not to specifically disqualify either Stuglin or Browning and their qualifications for those positions, but rather, to point out that the Administration Caucus has been a largely male-dominated group throughout the course of its history, with recent appointments being not much different.

4. “One member, one vote has absolutely nothing to do with corruption and will not prevent corruption. Corruption begins in the heart. Strong financial controls and strong accurate oversight prevents corruption.”

I think it’s very important to note that not all corruption is illegal. Bloated union officials’ salaries are not illegal. Favoritism is not illegal. Contracts that overwhelmingly favor the employer are not illegal. A slew of appointed officers beholden to the AC are not illegal. A one-party dominated union is not illegal. An ever-increasing number of joint programs that tie our leadership to the corporation’s agenda are not illegal. Isolating Locals during strikes and contract votes isn’t illegal. Competitive Operating Agreements and Memorandums of Understanding are not illegal. However, I would deem these practices ideologically corrupt. And no set of strong financial controls or accurate oversight is going to prevent this type of legal corruption. However, at the very least, 1M1V would greatly deter our union leaders from engaging in such practices because they would be directly accountable to the membership. Their ability to hold on to their positions would depend on the votes of the rank-and-file, not an unwavering loyalty to the AC.

But perhaps the most concerning aspect of Brother Gamble’s criticisms of One Member One Vote is that it appears from recent comments that he just doesn’t trust the membership of the UAW to have the knowledge and/or intelligence to make the best decisions for themselves moving forward. The idea that the membership doesn’t really understand the issues that affect them on a day to day basis is nonsense. Workers in the UAW live the conditions in the factories, universities, court rooms, etc, every day they go to their jobs. They understand the issues more than anyone at the Solidarity House ever could. Yet, it appears Brother Gamble does not agree.

After all, this is the main feature of our current delegate system — that we need delegates to make the right decisions for us. We need delegates to elect the right International Officers, and if the will of the membership is deemed to not be in the best interests of the Administration Caucus, delegates must intervene to keep the status quo intact.

Every member of our union deserves better and we have an historic opportunity to demand just that come November.

Enjoyed this post? Never miss out on future posts by following us

A Jewish Woman's Break From Zionism