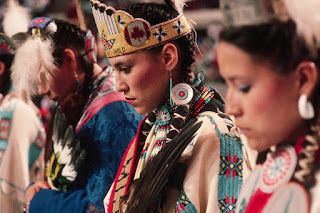 I am posting this as it was written by the author who requests it be shared. The image is not connected to the original piece below. R Mellor.

First Nation's are victimized by human trafficking at rates higher than that of any other Ethnicity. Though statistics are few and far between, testimony from experts, activists, and tribal leaders – as well as independent investigations – have revealed a disproportionate impact. A Study conducted in the U.S. and Canada, “an average of 40 percent of women involved in sex trafficking were identified as an AI/AN or First Nations,” yet First Nation women only represent 9% or less of the general population in communities studied.

Also Did you know that non-First Nation's cannot be arrested or prosecuted by tribes for Human Trafficking instead they fall under federal jurisdiction – allowing non-First Nation traffickers to operate with little risk. A 2012 UN Report estimates that almost 80 percent of rapes of First Nation's women occur at the hands of non-First Nation's men, highlighting this dangerous gap in enforcement. Support services for at-risk individuals and survivors are also limited for First Nation's girls and women due to a lack of resources. For example, a 2016 survey identified a large gap in access to services; over two-thirds of the 650 tribal lands reviewed experienced a significant dearth of access to sexual assault examiners and sexual assault response team programs, while 381 reported no service coverage within an hour’s driving distance.

Another big Factor of First Nation's Women that are Trafficked is The proliferation of the fracking industry this also contributed to a rise in sex trafficking of First Nation's girls and women as “man camps” were established in remote areas of Minnesota, North Dakota, and South Dakota, creating a high-demand for sex in an environment rampant with drugs, alcohol, and limited supervision. While there was widespread media coverage of the rise of sex trafficking in the Bakken, discussion of its impact on First Nation girls and women was limited. What i wonder is Why is it a Big issue & all over the Media if just one person of the caucasian race is Missing but nothing is being Published while Thousands of First Nations Women are Missing?!?! Every Since a European man mistakenly came to what is now known as the United States in 1492, First Nation's Women have Been Lusted after, Murdered & Raped.

I'm not trying to scare anybody out there but I do want people to know what is really going on out in this world. Remember Relatives their are internet Predators that try to lure First Nation's Women, Men & Children in to a trap & it could ultimately cost you your life!! Please take picture's & do only video's that are appropriate for your parent's to watch. Showing a bunch of skin or showing your body off for the world to see means your asking for trouble with these predators. Predators will not think twice about taking you & never bringing you back!! Please do not fall victim to these predators. Urako for Reading & Caring enough to Share this Post to Any & All Relatives!! I Love you All & will pray for All Missing & Murdered Indigenous Peoples & their Families.
#NoMoreMMIW
#NoMoreMMIC
#NoMoreMMIM
#NoMoreMMRelatives
Posted by Richard Mellor at 9:14 AM