Veterans Day is Not about Thanking Veterans

It's About Ensuring We Have More of Them

I just watched the start of Monday night Football in one of my local haunts and the San Francisco Forty Niners are playing the Seattle Seahawks. The national anthem is about to be sung by a man in uniform on a platform flanked by others in uniform. He is an Asian man by the looks of it, and in the US this means East and Southeast Asia it doesn’t mean an Indian, Bangladeshi or Pakistani like it would back home. He’s there to show the US military and US society as a whole is inclusive, and non racist.

Below him there are lines of people in military garb and a huge American flag is slowly unfurled on the ground. Perhaps there were jets flying around too as occurs on occasion to advertise US capitalism’s most advanced peace keeping equipment. I left before I could determine that.

The whole scene nauseates me and I let out a loud wow as the monster flag was slowly appearing on the pitch  A young couple sitting a few places over, hear me and the man quickly places his hand over his heart. Oh dear, I thought to myself, I am about to get in trouble. I say should we sit or are we all supposed to stand and the young woman says she too is unsure and feels unsure about it. She is Latina which is encouraging.  I then move on and say it reminds me a bit of Nazi, Germany, a bit too nationalistic for me I say.

I made some comment about the suicides in the military and the way they are treated when they return after finding themselves in the most horrible position of being shot at or having to shoot at another human being with the intention of ending their lives. I point out that those most aggressively campaigning for wars never fight in them and so on, that the rich don’t fight wars working people do.

The young man was clearly not offended by my remarks and I am not sure if he was unsure about my position and did not want to be seen to be enjoying a pint on veterans day without being sufficiently patriotic so he did the hand over heart thing. Either way, they were not gung ho on war and the military and had serious thoughts about the nature of it all. As I left I urged them to watch Sir No Sir as we also talked a little about the Vietnam War. 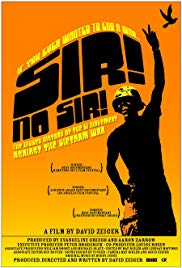 But the reality is that the US is a very nationalistic and militaristic society. The draft was ended in 1973 so we have what they call an all-volunteer military force. As most workers don’t join the military for sadistic reasons, the conditions that draw them have to be created. Poverty, desperation or the lack of opportunity for employment and advancement is a big plus. Getting cheap loans, a free education are also used. As it is, less than 0.5 percent of the U.S. population is in the military. This has a crippling effect on a small number of families whose young sons and daughters are sent to defend US capitalism’s profits abroad.

The propaganda of patriotism and nationalism is very strong. We are told to “support the Troops” which means in reality that we must support US capitalism’s predatory wars. But the flag waving is all for when our young people are leaving these shores not so much when they return; this is common of all nations. Meanwhile, the opioid crisis has devastated young veterans and in 2018 325 active-duty members died by suicide.

Veterans of combat have always constituted a significant portion of the homeless, “Iraq and Afghanistan war veterans are facing elevated rates of suicide and mental illness, drug and alcohol dependence, car crashes, and homelessness.”, according to statistics, “At least 970,000 veterans have some degree of officially recognized disability as a result of the wars. Many more live with physical and emotional scars despite lack of disability status.”  Watson Institute: Costs of War.

“The US will be celebrating Veterans Day tomorrow, and many a striped flag shall be waved. The social currency of esteem will be used to elevate those who have served in the US military, thereby ensuring future generations of recruits to be thrown into the gears of the globe-spanning war machine.

Veterans Day is not a holiday to honor the men and women who have dutifully protected their country. The youngest Americans who arguably defended their nation from a real threat to its shores are in their nineties, and soon there won’t be any of them left. Every single person who has served in the US military since the end of the second World War has protected nothing other than the agendas of global hegemony, resource control and war profiteering. They have not been fighting and dying for freedom and democracy, they have been fighting and dying for imperialism, Raytheon profit margins, and crude oil.”

"Last week I saw the hashtag #SaluteToService trending on Twitter. Apparently the NFL had a deal going where every time someone tweeted that hashtag they’d throw a few bucks at some veteran’s charity. Which sounds sweet, until you consider three things:

1. The NFL’s ten wealthiest team owners are worth a combined $61 billion.

2. The NFL has taken millions of dollars from the Pentagon for displays of patriotism on the field, including for the policy of bringing all players out for the national anthem every game starting in 2009 (which led to Colin Kaepernick’s demonstrations and the obscene backlash against him)."

This is an accurate account of what Veterans Day really is about in my view.

I want to remind, no urge the reader, to remember Pat Tillman. Tillman gave up fame and fortune in order to join the US military and defend his country from those that attacked it on September 11th 2001.  He was all over the media. Donald Rumsfeld, Wolfowitz and other warmongers took him and ran with him. He would be the poster boy for the US military. He would encourage young men to do the same and join up. 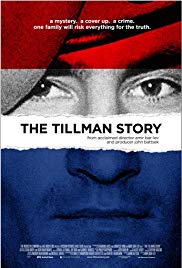 But Pat Tillman was a genuine leader and an honest person. Afghanistan and his experience in the military led him to draw different conclusions. He was not going to do the US warmonger’s bidding. He was not going to be the poster boy for military service. He has been airbrushed from history. He was killed by what we are expected to believe was friendly fire while serving in Afghanistan. The same qualities that drew him to join the military would be the same qualities that would lead him to play a different role on his return. He was respected, looked up to, seen as a genuinely honest and principled individual; everything those who send our young people in to these predatory wars are not.

I recommend the reader take the time to watch The Pat Tillman Story.  One cannot help doubt the official version of his death on watching this while at the same time feeling proud and impressed by his mother and father and the struggle they went through to get to the truth.

Most importantly, lets not continue to be fooled and let’s tell the truth about what the military is for. It is an offensive force, not a defensive one. And for so many it’s simply a job; often the only decent one around.
Posted by Richard Mellor at 10:19 PM

Email ThisBlogThis!Share to TwitterShare to FacebookShare to Pinterest
Labels: US military, veterans, War