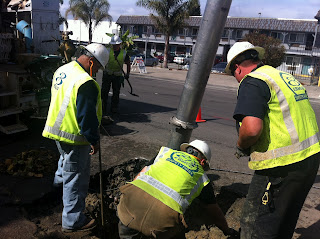 I have been retired for almost nine years now.  I am a retired public sector worker.  I started working for the local water company as a laborer in 1976.  It was the job of a lifetime.  Prior to this I was working  for a private contractor busting my ass for $3.00 an hour. That was in construction. I also worked for $3.50 an hour as a teachers aide in the Oakland schools which I loved and that taught me to have a serious respect for teachers in urban schools.

My retirement I am told is what is destroying the US economy. I can live on my retirement so far, of course, this is the US, and if I get sick who knows?  Most bankruptcies in the US occur because of medical expenses.

Whenever I drive around the area I see my former co-workers, or the water company taking care of business, making sure residents get water 24 hours a day, seven days a week. This water company was formed in 1923.  Prior to this, there were competing private companies and water service was just too unreliable, after all, profit is what matters in private business.  I remember one time when we were called out for an overtime job at three in the morning. It was a concrete street and it was those days before we had concrete saws and we had to spend hours on end leaning on a paving breaker trying to break the concrete. Most of us have structural problems due to those days.

A woman came out of her house complaining about the noise. "Do you want a shower in the morning?" I said to this women, "If you do, then this is what we have to do, I don't want to be out here either." We were always proud of ensuring during an emergency that we had a consumer's water on in time for work in the morning.  Despite all the propaganda to the contrary that we don't care, this was what almost every employee saw as their goal including our immediate supervisors. Human beings are productive animals, we want to go home at the end of the day and feel like we have contributed to society, produced something as opposed to speculating and gambling on stock markets or spending the day counting money. In those days when we had to work overtime on emergencies, there were no restrictions.  So we might work 24 hours our 18 hours and then we'd have to take sick time to go home and sleep although on occasion a supervisor, many of whom came out of the ditch, would give a crew that had been up most or all of the night an easy job that day. Later on, the Union won us fatigue time so we could go home and sleep and not lose a day's pay.

We in the public sector are under the gun these days.  The hedge fund managers, Wall Street bankers and other the coupon clippers who make all the money in society want to blame us because our wages, benefits and pensions are destroying the economy. This is a smoke screen of course as it is the crisis of capitalism, the wars, the speculation, the gambling that is destroying the economy.  It used to be auto, but since they have driven the auto workers to 1930's wages and conditions with the help of the leaders of the UAW, now it is us, the public sector that they want to make the scapegoats along with immigrants.

Since being retired, I cannot help when I drive in the community stopping by when I see the crews that I used to work with doing some repair or another. Sometimes, I don't even recognize the guys as I have been gone almost 9 years, but often I do and it warms my heart to stop by and chat with them.

I did yesterday when I saw a crew working and it turned out they had a small split on a 6" cast iron main.  Man, that's a muddy job but I miss it. I have a couple photos here to show you what went on.  The right wingers and the bosses' media portray us as people that don't work.  But we provide water, energy, drivers licenses, transportation, garbage collection and all these services to the people of this country. We fight the fires and actually fight the wars.  I am not competing with our brothers and sisters in the private sector here, like the auto workers for example.  Generations of auto workers contributed to making this a rich country and people like Ford and Kirk Kerkorian billionaires. Generations of slaves and immigrant agricultural workers did too, but the coupon clippers don't care about that. If we gain anything from this,  they consider it welfare.

I read about the miners in South Africa today and the Mau Mau fighters who fought against the British to get their land back and the Chinese workers who are striking Foxconn  and Apple and the indigenous in Latin America fighting Chevron.  These are my kin, my brothers and sisters and I am inspired by their struggles on behalf of all of us.


In these photo's you see a machine that sucks up dirt so we don't have to dig so much with shovels like I have done most of my life.  This is a good thing.  But the problem is that the machine, or the technology which is what it really is, is not owned by us, the workers and our communities. If it was, we would use it to give us more leisure time and make our lives easier.  But as my co workers said, we are doing as much if not more work with less people.  So labor saving devices, technology, is used not to make our lives easier but to increase our workloads, to exploit us further, to get more work out of fewer workers while others are thrown on to the dole queue; the owners of capital call it "squeezing" more production out of the workforce.

While I worked for a public agency, we still functioned in a capitalist economy and there is more and more pressure for us to "compete" to be more like the private sector. The coupon clippers want to privatize public services because public investment crowds out private and reduces opportunities for making profits.  Michel Kalecki, the radical Keynesian, wrote in a paper titled:  The Political Aspects of Full Employment, in 1942: “The economic principles of government intervention require that public investment should be confined to objects which do not compete with the equipment of private business (e.g. hospitals, schools, highways).  Otherwise the profitability of private investment might be impaired, and the positive effect of public investment upon employment offset, by the negative effect of the decline in private investment.”

The problem is that capital is a social product, a collective product and should be collectively owned and collectively allocated in a planned, rational way.  We have to look at the world differently to the coupon clippers who see an expenditure like the USPS as a missed profit making opportunity and wasteful expenditure.  In reality it is simply the wealth created by our collective Labor being returned to us as a public service, profit shouldn't enter in to it, but it always will to the capitalist because that is what they seek when they set production in to motion, not the use of the final product but the value contained in it that is greater than the value they invested in its production.