Some thoughts about work, racism and Irish history.

When I came to the US someone told me a polish joke. It was one of those jokes that implies that being stupid is a national trait.  I suppose Chopin or Copernicus were exceptions.  But this joke didn't really connect with me because he had the wrong nationality.  Growing up in England, our Polish jokes were about Irish people.

My first jobs were in construction, along with loads of Irish immigrants. I was a laborer. If you'd have asked me what I was with regards to "profession" that's what I said.  I might have been a plasterer's laborer or a brickies laborer any given time and I wasn't ashamed of it.  I was even a shop fitter's laborer, but laborer was it. I was not a skilled worker, sewer constructor was the highest accolade I got. I certainly wasn't an "associate" or "team member" and had you referred to me as middle class, I would have been very insulted; "Why would you call me that?" I worked for the Mauritian chippy, the Plasterer from Yorkshire or the Brickie, wherever the ganger man wanted you to work. Carrying hod for a Brickie was better than for a plasterer because the damn plaster moved around and was very heavy.  I tried to keep away from the hod.

On one job everyone was pretty much named Patrick Murphy or similar Irish names although we weren't all Irish though most of us were. We got our checks at the end of the week, went to the pub where the landlord cashed them.  We got drunk in his pub then went home and up for work again Saturday morning. We worked six day weeks for three pounds ten shillings a days.  This one particular Irish foreman paid the his Irish guys four pounds a day.

The Irish were our Mexicans in a way. Ireland was occupied by the British for hundreds of years and was a source of cheap labor and cheap food for British capitalism; its relation to the world was through Westminster just like any other part of England. Irish history is filled with the struggle for emancipation from occupation.  The six northern counties are still under British rule.  I had never been there but there was always the talk of the poverty and backwardness of the place.  I worked with young guys who were literally rural peasants, had never been out of their local villages and the local community.  They were not sophisticated or worldly.  They were poor and their desperation was viciously exploited. There were lots of jokes about the Irish and how stupid they were, dirty and had too many kids; they were after all, Catholics.  I remember someone saying there were two types of Irish women "nuns and whores". It was impossible to make up jokes about them being lazy because they did the worst work and the hardest jobs building the roads and structures of England.  There is a song that has the line in it "building up and tearing England down" it might be the name of the song, I can't remember.

One of those songs has these words:

It never occurred to me at the time the great poets, writers and playwrights that came out of this small community.  In my early years, I never really considered that there was an Irish language or wondered why they were scattered to every corner of the earth.  I just thought they all spoke English with accents.  We worked hard, drank good times and had the craic, an Irish term that I am not sure is translatable but it is about life.  But my knowledge of their history and the whole IRA thing was almost non existent.  And I grew up Catholic, went to Catholic schools with nuns and Irish teachers and a lot of Anglo Irish kids or the children of Irish immigrants.  In my later years, the fact that I am also of Irish ancestry has become of some interest to me; that's why we were Catholics in a mainly Protestant country.  I was there as part of that Irish diaspora.

In the US, there is a tendency to see the division in terms of color predominantly, this is what the capitalist class promotes and it's been very useful for them.   This is not an accident.  It is an effort to obscure the class divide primarily and something Malcolm X rejected when he said that he believed there would be a clash but it would be between the oppressed and the oppressor, not based on the color of people's skin as he once thought. This doesn't mean that racism isn't a special category An entire Apartheid system existed in south of the country, one of the most brutal regimes in modern history. As a shop steward in a very diverse workplace, having the wrong approach to this question could have had very bad personal and political repercussions for me.   I remember when I first came here and it appeared to me, a much less politicized me, that the general idea was to convince Americans and the world that the US was fine but the blacks have a problem.

The Irish had white skin but there was no privilege associated with it, nor did their skin color help the children of Lancashire's cotton factories or Yorkshire's mines where entire families and their young children would work underground for 16 hours a day. With the increase of workers from the other colonies, mostly workers of color, it was said this gave the Irish (and us) a breather.   Having different color skin was the great dividing line and they could tell all the white workers how they were better than these folks, now, for some, skin color could be useful.   The "darkies" had arrived.

But Ireland was ravaged by British occupation before India or Pakistan. Perhaps you could say feudalism introduced capitalism to Ireland, I would need to read a  bit more to be more familiar with it.  But with Cromwell's invasion after the English revolution the brutality and oppression intensified.  It is not an accident that so many Irish people left their country of origin.  Like the economic refugees that are forced to leave Central and South America to come north looking for work and survival, or the Eastern Europeans getting a taste of the free market heading to western Europe, or the Indonesian workers in Saudi Arabia, Irish people left their country in the search for work, to escape starvation and poverty. In Mexico, alone, NAFTA threw more than a million farmers off their land depriving them of their means of subsistence.

The years 1845 were the famine years in Ireland called the great Irish Famine or the Potato Famine. But as one Irish historian pointed out, "Almost throughout the five-year famine, Ireland remained a net exporter of food." this was food as a cash crop which was not produced for the bellies of those that produced it.

Another Irish historian adds:
"Ireland was actually producing sufficient food, wool and flax, to feed and clothe not nine but eighteen millions of people," yet a ship sailing into an Irish port during the famine years with a cargo of grain was "sure to meet six ships sailing out with a similar cargo." 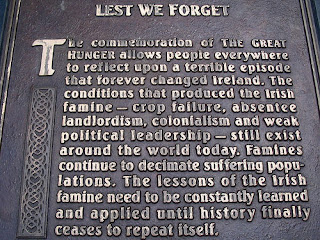 Author, Dr. Christine Kinealy writes, "9,992 calves were exported from Ireland to England during "Black'47", an increase of thirty-three percent from the previous year. In the twelve months following the second failure of the potato crop, 4,000 horses and ponies were exported. The export of livestock to Britain (with the exception of pigs) increased during the "famine". The export of bacon and ham increased. In total, over three million live animals were exported from Ireland between 1846-50, more than the number of people who emigrated during the famine years."

Dr Kinealy writes in her "History of Ireland" that "almost 4,000 vessels carried food from Ireland to the ports of Bristol, Glasgow, Liverpool and London during 1847, when 400,000 Irish men, women and children died of starvation and related diseases"

What made Ireland so poor and  gave it the status of a colonized African nation in northern Europe was that it was a colonized nation, one of the first nations that British capitalism colonized beyond the borders of its own nation state.  British colonial strategy was first tested and fine tuned in Ireland before India or Africa.  Ireland was a source of cheap food and cheap Labor for a growing and hungry British capitalist class.

In its publication, The Great Irish Famine, the Irish Famine Curriculum Committee shares the staggering statistics:

"The most shocking export figures concern butter. Butter was shipped in firkins, each one holding nine gallons. In the first nine months of 1847, 56,557 firkins were exported from Ireland to Bristol, and 34,852 firkins were shipped to Liverpool. That works out to be 822,681 gallons of butter exported to England from Ireland during nine months of the worst year of "famine". If the other three months of exports were at all comparable, then we can safely assume that a million gallons of butter left Ireland while 400,000 Irish people starved to death!" (My added emphasis)

Irish peasants were sold as slaves for the Caribbean plantations and it was here that many of the slaves from Africa were also sent.  A friend tells me that there are revised figures about the number of Irish slaves sent there, many more than once thought.  We can see how racism was institutionalized as a means of dividing workers, this time it was not along religious lines as in Ireland between Catholics and Protestants, but between whites and blacks.

In the plantations, servants and slaves often ran away together so the owners introduced divisive legislation in 1661 and 1662 that made the servant, more often white,  responsible for the actions of the slave who was African and black. The bosses were always worried that unity between servants and slaves was a prospect and made every effort to undermine it, the most obvious was that the owner/boss was the same color as the white slave. servant or worker.  All sorts of laws were made to prevent the strong and natural tendency to class unity. Naturally, next time the chance to escape together came up, the white runaway's position was, "You're on your own baby."

This divide and rule tactic is still their weapon of choice in the US  today.

The quotes in this blog are from: The Great Irish Famine published by the Irish Famine Curriculum Committee.  Thanks to pat Byrne for sharing it.
If you would like a copy send me an e mail at: we_know_whats_up@yahoo.com and I'll e mail it to you.

I have not read it but the source website for the images recommends a book, Paddy's Lament about British brutality in Ireland.
Posted by Richard Mellor at 5:20 PM

My friend Liam left Ireland at age 18, I think. I'll send him this article. Very interesting. My first job was in a cemetery in Oakland cutting the grass. We had two Irish immigrants who still hadn't learned to read, and an Italian who couldn't tell time. A running joke was to ask the Italian what time it was. He was a 50 year old guy, I never insulted him like that.

Archeologists have discovered a mystery at the bottom of Lake Huron