Catholic church pays out $166 million to victims of pedophile priests 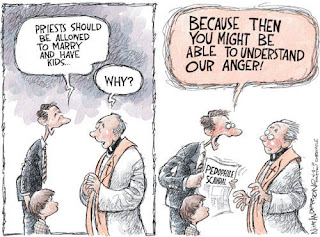 The Catholic church in the US has been forced to pay out a huge amount of money in reparations for the misconduct of its priests. According to attorneys representing the church, the USA's Pacific Northwest chapter of the Roman Catholic Church's Jesuit order has agreed to pay $166 million to settle more than 500 child sexual abuse claims against priests in five states, attorney's have said.

The Catholic church has covered up the crimes of many of its priests in the past.  One pedophile was sent from the US to a remote village in Latin America where he continued abusing the young of the indigenous people there. In the present case, the victims, were mostly Native Americans from remote Alaskan Native villages or Indian reservations in the Pacific Northwest; in other words, some of the most vulnerable of us. They were sexually or psychologically abused as children by Jesuit missionaries in those states in the 1940s through the 1990s, according to reports in the media.

"No amount of money can bring back a lost childhood, a destroyed culture or a shattered faith," said one lawyer for the children.  "These religious figures should have been responsible for protecting children, but instead raped and molested them." he added.

The present pope, a former member of the Nazi youth, has covered up much of the abuse.  The main response of this misogynistic and racist institution was to move the perpetrators to fresh ground where they could continue their abusive practices.  The catholic church, once the religion of the feudal aristocracy, has been one of the principle institutions holding back the development of human society. This does not mean that all Catholics are bad people. But we have to question why someone would still belong to such an organization. There is a tendency for people in such situations to say, "well, that's the head office, but here at the local level we do good work."

People say this in political groups also.  Many of Stalin and Hitler's accomplices said the same thing.  But it's like saying, "Well, I'm in the KKK but I'm not a racist. That's the folks at the head office or in the other branches." It is not a good response.


See, it doesn't sound right. A cursory historical glimpse at the catholic church reveals an institution that is among the most brutal and exploitative in history.  It finds the time to excommunicate women that practice the mass today but was not able to excommunicate Hitler. Click on the "catholic church" label to the right to read more.

It is a truly rotten and sexist institution.
Posted by Richard Mellor at 10:11 PM