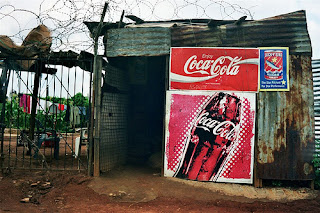 Having a 2000 mile border with the world’s dominant capitalist economy has had many negative effects on Mexico. Like Ireland with its proximity to Britain, the economy of Mexico is overwhelmed by the power and size of its northern neighbor.

Mexico lost territory, is economically dwarfed by the US, and has suffered invasions from the north on numerous occasions. Another not so well known destructive result of this relationship is that Mexico consumes more Coca-Cola than any other country in the world; 665 servings per year according to Business Week. *

Coke is also making a major push in to the entire continent of Africa, investing about $12 billion. Its rival Pepsi is number two there and Coke wants to corner the soft drink market. “There’s nowhere in Africa we don’t go”, says Muhtar Kent, Coke CEO, Coke is not playing the normal corporate game in Africa, setting up shop in a country’s capital and working from there. “That’s not what we’re about.” He says proudly, “We go in to every town, every village, every community, every township.”

That’s pretty impressive. What does Coke do in these places? BW describes one such place in Kenya, a small store, “no larger than a small bedroom”, that sells necessities and such. This little store sells 72 or so Cokes a day and for this, the corporation bestows on the owner the status of “Gold” vendor. This has its advantages like access to Cokes’ “globally standardized selling techniques”. Coke also supplies red signs and encourages her to promote “combo meals to boost profits”, a combo meal being a coke with a ndazi, that BW describes as a “kind of greasy donut.”, yummy, pretty soon they’ll be as obese as Americans despite malnutrition being quite widespread. Coke also supplies her with a cooler, a useful item in such a climate, and instructs her how to stock it with different Coke soda brands like and where to place it.

Coke is a bit desperate as profits are hard to come by. Consumers in the US bought $2.6 billion worth of Coke in 1989 and only $2.9 billion in 2009—not a very impressive increase over 20 years. It has drawn the conclusion that Africa is its best hope as long as the countries it infests will have cooperative governments. Coke has promised its investors 7% to 9% earnings growth so the pressure’s on.

Coke is in a “street-by street campaign to win drinkers, trying to increase per-capita consumption of its beverages in countries not yet used to guzzling Coke by the gallon” the report adds. 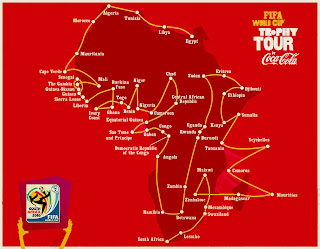 How lucky are Africans to have such a caring friend like Coca Cola, the continent's largest employer with 65,000 employees. CEO Kent can command the attention of heads of state like South Africa’s Jacob Zuma. Coke was a major sponsor of the World Cup which made considerable billions for numerous investors, most of them foreign. During the World Cup, Zuma and Kent hooked up, “When everyone was pulling him in one direction because it was right in the middle of the World Cup, he came and spent the whole afternoon with us.”, says Kent

In South Africa’s Alexandra Township Coca Cola is “sidling right up” BW tells us; the company “blanketed streets with coolers and Coke signage.” Alexandra has a population of about 500,000 and 65% unemployment, a staggering figure when you think about it. Perhaps Coke will do there what it did in Kabira, a Nairobi slum where all the shops “are Coke-red like colored links in a chain.” The slum, which is the size of Central Park according to BW, has no public water and no sewer system. Residents “..pay 3 shillings to fill used 20 litre cooking oil jugs with fresh water from a Coke-sponsored well.” Coke also wants to increase the use of plastic containers as it surmises the middle class will grow in the coming period and they will want to drink “on the go.” Coke is also helping to build a bathroom in the slum where resident can pay two shillings to use the toilet and clean up.

The Business Week report says that one problem is shortage of fresh water. There may well be, but water shortages and public water systems are absent in the main due to a shortage of infrastructure, in other words, capitalism is unable to develop society to the point that it can provide a sewage system, decent health care, housing, transportation and water for all. Maybe a few tarmac roads to and from a Coke bottling plant but not much else. That’s how I see it. 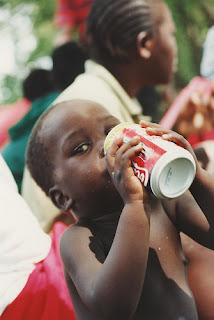 Left: Not exactly what this young one needs
Health activists and the group that produced the report, "Liquid Candy”,** are waging a global Dump Soft Drinks Campaign to combat obesity and malnutrition. This is difficult terrain, not so good for commerce, “..especially for a company whose chief product is discretionary and offers no nutritional value aside from calories.” Business Week explains.

When you read articles like this though, you get a sense of what could be done if the resources of society were not in private hands, if the allocation of capital, of resources both human and material, was decided collectively and on the basis of human need in harmony with the environment. They never refer to the system being to blame, it’s always poverty, war, water shortages, etc, but these are never connected to the economic system; it cannot be the system’s fault can it.

Email ThisBlogThis!Share to TwitterShare to FacebookShare to Pinterest
Labels: Africa

Debt allows capitalalism to go beyond its limits